Got a Home Loan in Virginia?
Get Low Refinance Rates From Just 2.12%.

Mortgage Refinance Rates on the Rise 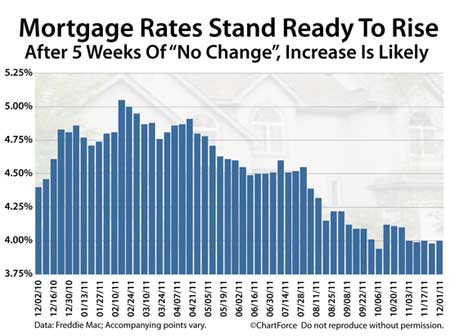 Mortgage Refinance Rates have remained mostly unchanged for the last five weeks; however, according to Dan Green of the Mortgage Reports.com interest rates are ready to rocket upward. If you’ve been on the fence about mortgage refinancing this might be the last week to take advantage of historically low-interest rates. According to Freddie Mac, a traditional fixed-rate thirty year home loan is 4.0%…where it’s been stuck for the past five weeks. Here are several reasons rates are expected to go up according to Dan Green:

Each week, government mortgage backer Freddie Mac issues its Primary Mortgage Market Survey, a recap of mortgage rates as issued at than a hundred banks nationwide. The survey comprises both purchase and refinance transactions, while ignoring “special” loans such as the HARP Refinance or jumbo-conforming loans.

As you can see rates have been around four percent; however, one of the most important factors to consider when mortgage refinancing with a lender like Amerisave is how much closing on the new home loan will cost you. Your closing costs like the loan origination fee can make or break the deal; if you pay too much it can be difficult, even impossible to break even recouping your out-of-pocket expenses.

There may be low-cost or even no-cost mortgage refinancing offers out there; but the catch is you’re trading paying out-of-pocket for higher mortgage refinance rates, meaning your monthly payments will be higher for the entire duration of your home loan.

You can learn more about avoiding unnecessary markup and junk fees on your mortgage refi by checking out my free Underground Mortgage Videos.

Next post: Women Are Paying More For Mortgage Refinancing

As Seen in Media